He is another of DIO‘s assassins, who confronts the Joestar Group as they drive through the northern part of India. He is a Stand User who drives his Wheel of Fortune, a stand that is bound to a car.

ZZ initially seems like an intimidating character due to his large arms and his loud, imposing speech. Arrogant and stubborn, ZZ thinks of himself as superior to his enemies and often compares them with bugs and insects in general. He is described as an angry, stupid and strong man who can't even solve a Rubik's cube, heavily relying on brute force alone. He is, however, rather experienced in battle, maintaining his calm and not being impetuous. Even though he's rather cunning, managing to trick the Joestar group multiple times, his arrogance is his weakness, as he eventually told his enemies what he was planning to do and the secret behind his technique.

When his car is destroyed he proves to be a coward who only pretended to be strong, running away without his Stand to protect him. To the group's surprise, ZZ is revealed to have large and muscular arms, while the rest of his body is relatively skinny. According to Araki, his body was shaped this way only to make a joke.[2]

ZZ's Wheel of Fortune can enhance a car into an upgraded and monstrous version of itself, allowing normally impossible driving feats and in general having full control of the car's pieces

ZZ is first seen driving his car slowly along the road to Pakistan. Jean Pierre Polnareff, driving the group's jeep, rudely passes the car and kicks up some rocks with the jeep on purpose to taunt the slow driver, but the group soon realize that they are being followed by his car. ZZ then directs his car to pass and begins to drive slowly again, and when he directs them to pass, he directs them into the way of an oncoming truck, which Star Platinum saves them from by stopping the truck and pushing the jeep away from it in midair. ZZ is then seen switching the direction of the sign to Pakistan in order to corner them at a closed road later.

The group stops for some rest and spots ZZ's car again, which they then give chase. Soon, Noriaki Kakyoin realizes that the group is headed the wrong way and Polnareff stops the jeep abruptly at the end of a closed road. ZZ then appears from behind and pushes the group's jeep off the cliff. Kakyoin's Hierophant Green, however, manages to hook the jeep's harness onto ZZ's car, stopping their fall. Jotaro Kujo then directs Star Platinum to tug on the rope, forcing ZZ's car to back up, and then punches the car, causing ZZ to fall down the cliff.

However, ZZ is revealed to have survived and reveals to the group that he was using a Stand, called Wheel of Fortune and his knowledge of Joseph Joestar's name. He then bursts out of the ground in his car, smashes the jeep, and transforms his car into a more aggressive style. He charges at the group and fires gasoline bullets at them through his car, while effortlessly squeezing between crevices and causing spikes to grow out of the wheels to enable it to climb the cliff. After climbing the cliff, ZZ reveals that the gasoline bullets were meant to set them on fire and sets off a spark that sets Jotaro on fire. ZZ proclaims his victory, only to be met with Jotaro, who reveals that he dug a tunnel with Star Platinum and that the only thing that was burned was his jacket.[3] Now defenseless on his side, ZZ is left unable to defend himself as he is propelled out of his own car and plowed into the ground with Star Platinum's barrage of punches. ZZ is then subject to the ridicule of the group as they realize that the rest of his body is skinny and the strong-looking car he drove earlier turned into a smaller car. He is then chained to a rock with a sign nearby that states that he is training and would not like to be disturbed. He is robbed of his passport and car, and left behind to starve to death.

ZZ is one of the many bosses featured in the game. Like in the manga, ZZ attacks the group while they drive in Northern India. The battle has two phases, first Wheel of Fortune will be in its normal form but subsequently takes its fully developed form after dealing sufficient damage. ZZ is eventually defeated.

In the "Deadly Traffic" chapter of the Story Mode, the Joestar group encounters him on their way to Pakistan from India. His part in the story plays out much like the manga, though the player must go through several quick time events to defeat him.

ZZ and his Stand appear in the game as a playable character. 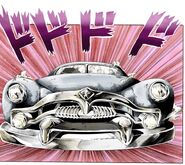 ZZ's car before he uses his Stand 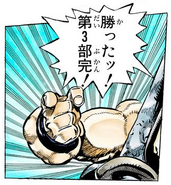 ZZ chained to a rock

ZZ's car before he uses his Stand

ZZ chained to a rock

ZZ in Heritage for the Future