A Zombie (, Zonbi, lit. "Undead Person") is a secondary undead created by a Vampire who has donned the Stone Mask. "Undead" (, Andeddo) is also sometimes used.

Anything from long-buried corpses to hybridized organisms can be made into a zombie. Those who have their blood sucked out by a vampire (and infected with a vampiric extract in the process) are turned into zombies who no longer feel pain. Skilled Ripple users are able to reject this process.

While the zombies found in Phantom Blood were typically lesser beings that had no special vampire abilities, including the ability to regenerate, the discrepancy between the two is much more vague in Parts 2 and 3. Their physical strength and speed is nonetheless greatly enhanced. Some zombies seem to be able to maintain their human personalities, notwithstanding a corrupted version of it due to their undead forms.

As lesser beings, the majority of zombies base their methods of attack on their lives as humans, making each unique and unpredictable. Zombies are known for having a rotting stench, a monster-like appearance and an insatiable bloodlust for human flesh. Most of them, however, hide their true appearance through disguises (like Adams and Doobie).

The Blood Vessel Needle Attack (血管針攻撃, Kekkan Shin Kōgeki) is used by four of Dio's zombies: Page, Jones, Plant and Bornnam. Consisting of small antennae coming out of their heads capable of sucking the blood of their victims, they use it to attack Straizo simultaneously.

In Stone Ocean, the Stand named Limp Bizkit permits the creation of zombie-like creatures, manifesting as tangible spirits that climb out of their corporeal bodies and are thus rendered invisible. Sports Maxx, Limp Bizkit's own user, also becomes a "zombie" through the use of his powers and displays strength, speed and hunger similar to vampirically-made undead. These beings are called "corpses" (死骸, shigai) rather than "zombies". 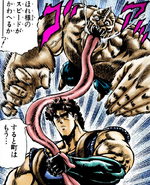 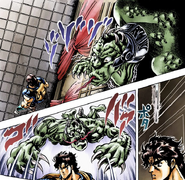 Zombies under the command of Dio