Gyro Zeppeli
Zombie Horse (ゾンビ馬, Zonbi Uma) is a strange medicine given to members of the Zeppeli Family, featured in Steel Ball Run. Gyro Zeppeli receives it as a gift from the King of Naples.[1]

During the race, Gyro receives a letter from the King's messenger detailing the location of a "Zombie Horse" in the Red Canyon 50 km north of Gyro's position. Oyecomova, a terrorist from Gyro's country, reads the letter, resulting in a conflict with the protagonists over possession of the Zombie Horse.

The Zombie Horse's normal appearance is an oddly stylized mural in the shape of an "awful-looking horse with a ferocious face," according to Gyro. Its true form is a string capable of healing fatigue and regenerating (to a certain degree) any injury. With it, Gyro was able to reattach his leg that had been blown off during the fight with Oyecomova. When Johnny Joestar sees it for the first time, he questions whether or not it is a Stand ability.

Later on, Gyro uses his Steel Ball and Zombie Horse to mend Johnny's wounds after the latter is shot from his first encounter with Funny Valentine.[2]

Zombie Horse on the rock wall 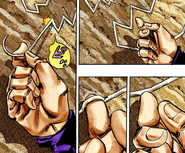 Removing from the wall 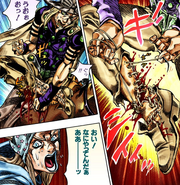 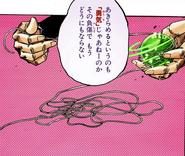